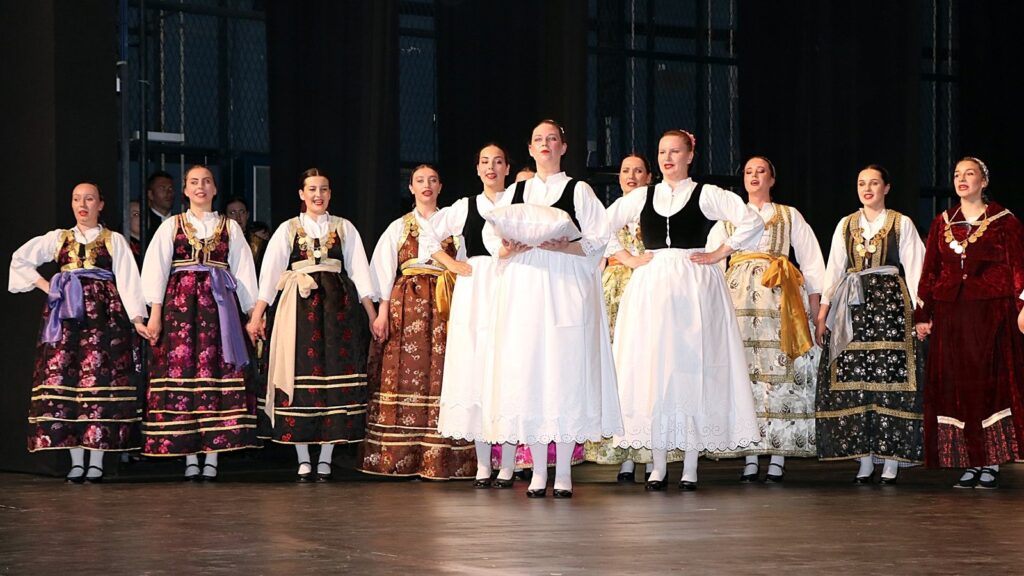 On Sunday, May 22nd, 2022, the FA « Slavonske kraljice » of KUD « Tena » held a traditional annual concert called « Kolo igra, tamburica svira » in the packed hall of the Cultural Center in Đakovo.

This year’s concert carries special weight because it is dedicated to two longtime members – Jakob Mandić and Matija Pavić, who passed away this year.

« Both of them have been members since the founding of Tena, and twenty years ago the initiators and founders of the Male Vocal Group « Bećarine » with whom they proudly enjoyed the Šokac, Slavonian, Croatian song to their last breath. They have embedded themselves, their personality and loyalty into what Tena is today », said at the beginning of the program host Mato Ručević.

Thus, the concert began with a video production of photos of their existence in the KUD, which was accompanied by a song by members with famous lyrics of i kad umrem pjevat’ će Slavonija (And when I die, Slavonia will sing).

After paying their respects, the members of KUD « Tena » showed what they are best at. Promoting Croatian folklore through song and dance. The program included a number of choreographies, songs and orchestral performances from the Pannonian to the Adriatic Dance Zone.

The crown of the concert was a display of the splendor of the Bunjevci from the north of Bačka. « Bunjevački rokoko » and « U Bunjevca salaš bili » were rounded off with the Bunjevac anthem « Kolo igra, tamburica svira ».

To prove what Tena means for Đakovo and Croatian folklore, there was a packed hall of enthusiastic spectators who were looking for an encore after the two-hour program.

« This is what we love and what we do. Long live Tena » commented the president of KUD Dinko Hrehorović.